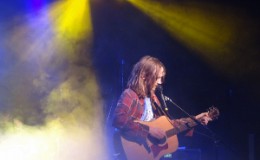 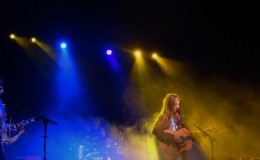 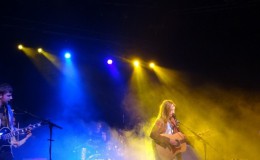 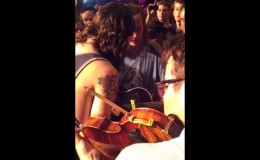 “You can tell a band is going to be great when they choose a song like this to enter to”, wisely observes my friend Caroline as we sway to the original version of My girl wants to party all the time in anticipation of Dry The River’s set. We’re fairly confident that this bodes well for their performance, and if there’s one thing Dry The River do well, it’s performing. The quintet from London have been making guitar-driven rock together for about three years, and tonight convincingly demonstrate why a genre that got usurped by the skinny-jeaned, buttoned-up indie takeover circa 2002 is seemingly working out so well for them now.

The curiously-chorused Shield Your Eyes opens tonight’s set, and I find myself wondering what newcomers to Dry The River’s music might make of the repetitive mentioning of a phrygian lion (Google won’t help you much, I’ve tried): ‘when Moses was a whisper in the reeds/I carved you in the floodplain/by the Phrygian Lion/with his excellent eyesight/at the gate of our love’. Greek mythology, philosophy and Biblical imagery make frequent appearances in the lyrics of Shallow Bed, the band’s debut album released in March 2012. Lines like this make for rich and interesting listening, and it’s an album that continues to bloom even after multiple listens. It’s treated to an almost entire airing tonight at the expense of playing any new material.

Chattyman and bass player Scott Miller introduces History Book as one of the first songs they ever wrote together, and explains that a mild bout of jetlag hangs over them as they returned from a little jaunt to the USA last night, where they had been playing to rooms of 20 people. The audience at the Junction tonight is a happy contrast, packed in closely and quietly echoing lyrics back to the band. Weights & Measures begins with singer Peter Liddle’s tremulous tenor vocals quivering a capella through the first verse, with the audience joining in, before the power kicks in and carries the rest of the song away. The escalating excellence of No Rest leads into Bible Belt, both of which begin with tentative vocals that billow as Miller and guitarist Matt Taylor provide harmonies that rise above the tumult. During the latter, the band make the mistake of pausing for longer than they do on record, and the audience seizes the opportunity to fill in the line ‘you light the fire yourself’ for the band, causing smiles on stage and an easy camaraderie between band and audience.

Flickers of intimacy and longing frequently lead to turbulent conclusions, never better demonstrated than in the final song before tonight’s encore. Lion’s Den also displays the inimitable skills of violin player Will Harvey, who leads the cacophony of instrumentation that ends one by one as band members exit the stage, leaving guitarist Taylor to end and follow suit. The audience is left with an empty stage, the lingering distortions of Taylor’s final notes and a thirst for more, which they quickly and loudly make known. The band re-enters and plays through the relatively unremarkable Animal Skins before taking their time to announce what will happen next. Which, slightly to the disbelief of this well-placed reviewer, is that the band (minus drummer Jon Warren) wends its way through the audience to huddle in one small, unamplified circle and sing for one final time tonight. Shaker Hymns gleams in the hush, with shivering, fragile harmonies and only an acoustic guitar, that glorious violin and 800 irretrievably wooed friends for company.

// If you’re looking for radical progression from the energetic foot-stompery and opulent lyricism of...

// The Olympics is kicking off in Rio, so we're getting into the Brazilian spirit.